Headlines surrounding ride sharing apps and autonomous vehicles are nudging into my daily reading list like people butting in front of me in traffic. But I don’t mind. Since the 1970s I’ve been a longstanding reader of future-oriented publications like Popular Science; I enjoy envisioning new-age living through technology.

The potential is admittedly huge. Accordingly, there are a lot of self-reinforcing promises circulating around how our society will change with the emergence of transportation disruptors like ride sharing and driverless cars. Notionally, going from A to B will become more efficient and we’ll all use less energy – regardless of fuel type – on the world’s tens of millions of kilometers of roads.

I’m wondering about all this, the future of transportation, in the ideal thought laboratory: A cramped and packed, sweaty subway car in London’s Underground. If you’ve ridden on the Central Line in the middle of summer during rush hour, you know what it’s like to take a journey to the center of the earth. The experience sharpens one’s senses to personal choice in transportation. But I’ll come to that shortly.

Looking at all the people on the subway with cell phones in their face, I remind myself that disruptive technologies have a history of breaking promises and surprising pundits with unintended consequences.

I remember when word processors on personal computers came out in a big way in the 1980s. Analysts led us to believe that soon we would all be working in a “Paperless Office,” the notion being: Why print anything out when you can call a document up on a cathode-ray screen in front you? Bucking the theory, it wasn’t long before letter-sized paper usage soared. Everyone in cubicles indiscriminately wrote more memos and printed out multiple copies. As well, each print “job” was sandwiched in between two sheets of paper imprinted with useless information like a time stamp and unintelligible network information. It wasn’t until 20 years later, when we ditched tube monitors for flat screens, and adopted mobile devices that we moderated our paper use.

Clearly, the paperless office only sounded good on paper. So what of driverless cars and ride sharing? Are their promises putting the cart before the horse?

Notionally, more efficient use of personal transportation assets – things like cars and vans – should cut down on the number of vehicles going from A to B, and the ride from A to B should be further optimized by a silicon-brained chauffeur that knows how to take side roads and politely cut in front of people while using as little energy as possible.

Another way to think about this is that people will be offered another A-to-B option that adds to the mix of scooter, car, bus, subway, tram, train, ferry, taxi and of course walking and biking. Places like London and Hong Kong have all of the above, so they are great places to think about the emergence of new modes of transportation – ones that are likely to fall in price over time and undercut many of the alternatives. The question in my mind is, where does: a) ride-sharing; b) driverless vehicles; and c) combo driverless-shared-vehicles, fit into a city’s transportation mix?

The common belief is that personal cars are most at risk of substitution. To me, driverless ride-sharing sounds like a minivan masquerading as public transit. Could it be that these new technologies cannibalize a city’s bus and subway system instead of drivers commuting in pick-up trucks?

I’m one stop away from my destination. Why did all the people around me (and me too) choose to take a packed metal can on wheels to get to where we want to go? Everyone made a choice by trading off: costs of the various alternatives; time-to-destination; and comfort. In London the tube is cheaper than a taxi and usually faster. A taxi costs more, but is more comfortable and direct. The bus is cheap, but slower. A car is very expensive and difficult to park. And so on. There is a satisfying order to it all. Autonomous driving and ride sharing will upset this cart of choice in all big cities. If it’s cheaper than the subway and more comfortable, I for one will likely call up a heartless set of wheels at the touch of a button. And if everyone does so, we’ll have more road congestion and less energy efficiency.

The subway’s doors open and I jockey around people to get out onto the platform.

In the future, I’m not imagining that the people’s alternative to this underground choreography is a cute little Google car. Recent data shows that if energy (gasoline) is cheap, consumers want bigger, better vehicles all to themselves. A few years from now I can imagine someone saying, “Solar power is free, so what the heck: dispatch me an electric living room on wheels so I can stretch my legs out, have a drink and watch my favourite show as I’m driven home.” To be sure, comfort will be revalued in the cost-benefit calculus.

Exiting the Underground station, I’m feeling uncertain about the consequences of these exciting, disruptive wheel-turning technologies. The future is coming fast, but like the paperless office experience I’m sensing that “disruptive” won’t necessarily mean more efficient use of resources.

It's astonishing that a country with Canada's oil reserves does not have energy security. #ARCEnergyIdeas https://t.co/MoIx5EX9s4
1 5

In Canada we produce more oil than we use, and yet we do not have energy security. It's interesting to discuss why this is, and what happens during times of energy crisis. #ARCEnergyIdeas https://t.co/nlaVIWkXp1
1 5

It's astonishing that a country with Canada's oil reserves does not have energy security. #ARCEnergyIdeas https://t.co/x6pi0NsXhx
2 12 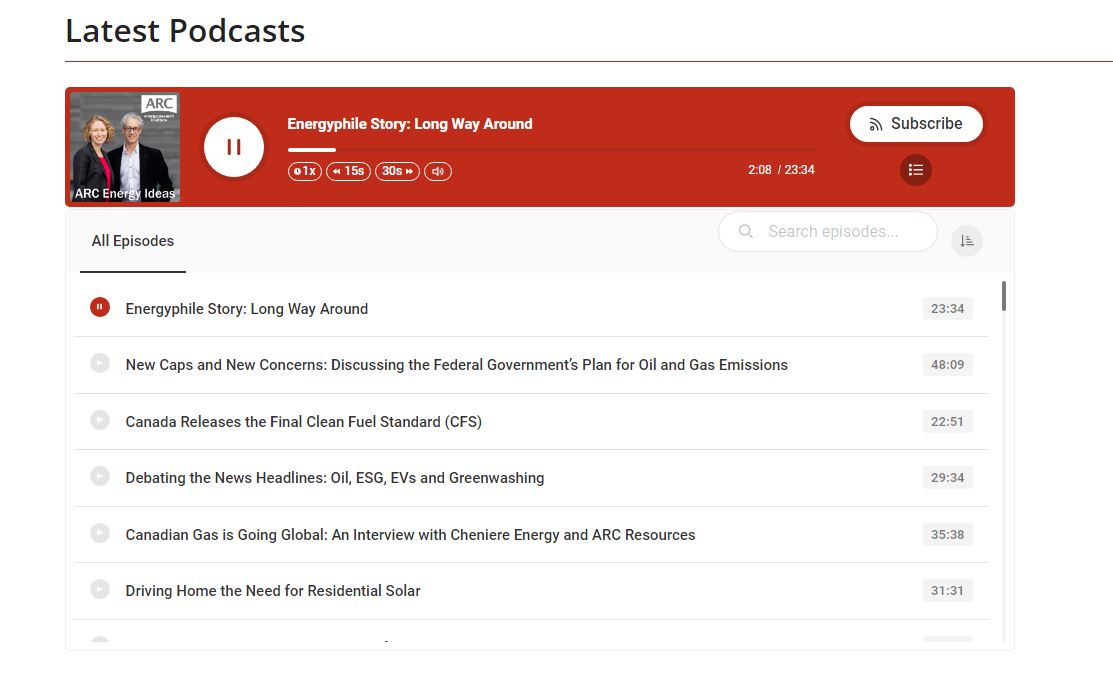